Those Abusing Marissa Mayer’s Personal Flickrstream Should Be Ashamed of Themselves: 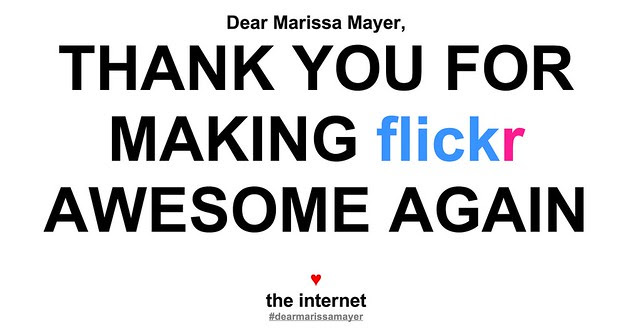 As one of Flickr’s most active users, I’ve been watching intensively over the past 48 hours as the new Flickr design has been released. Personally speaking, I’m a fan. I think the new Flickr is the best version I’ve seen yet and agree with almost every design change that they made. That’s not what this post is about though; I’ve already given my opinion on the new Flickr here.
This post is about respect and civility.
As the drama of the new Flickr has unfolded, an element of what I consider to be the worst of the internet has taken to Yahoo CEO Marissa Mayer’s *PERSONAL* Flickr stream to express their disdain. Sure, Flickr (the company, not the person) has a dedicated Forum for users to discuss the new designs, which is way more than many companies provide, btw, but for some people this isn’t enough. They need to take their displeasure out personally on Mayer.
Even worse, many of the attacks on Mayer’s *PERSONAL* Flickr stream are crude, classless, vulgar personal attacks of the worst kind.
This is just absolutely awful.
Whatever people may think about the new design, there is a way to go about talking about change. It saddens me to see the lowest element of the web react this way. It saddens me to see people in the help forum egging others on to go post on Mayer’s personal page.
Ironically, it was “the internet” that asked Mayer to “make Flickr awesome again” when she first started up as CEO of Yahoo. Flickr had been neglected for years and finally Mayer would be our savior.
Then, she goes and actually DOES make Flickr awesome again and people freak the fcuk out. Gee, thanks a lot! At least the page that asked her to make Flickr awesome again gets it right.
Now, whether or not you love the new Flickr or hate it is your own opinion; design can sometimes be subjective — but to post images of excrement on someone’s personal Flickr page over that design opinion? Really? Watching people in the Help Forum encourage the trashing of someone’s personal Flickrstream is disturbing.
Mayer is the first ever CEO of Yahoo to have a public Flickr page. She goes out on a limb and participates in the community and this is what people do? They trash her *personally* over design decisions?
These people should be ashamed of themselves.
I am all about healthy debate. I’ve probably been more vocal and critical of Flickr than just about anyone over the years. I’ve also been a huge cheerleader for Flickr when I feel like they’ve done well. I love Flickr and want to see it be the best place it can possibly be. I may get emotional and heated in my opinions sometimes, but there is a way that debate should go on on the internet, and trashing someone’s personal stream is not it.
Mayer is the youngest CEO in the S&P 500. Whatever your opinion on her and her work, every intention she has with the new Flickr design is to make it BETTER. Being a highly visible CEO means taking a lot of flak. I understand that — but Marissa Mayer is also a human being, and deserves basic respect and civility — like EVERY OTHER HUMAN BEING.
One of the reasons why I’ve largely quit Flickr Groups is because you can’t block people in Flickr Groups. I encountered some of the worst human beings I’ve ever met online in some Flickr Groups. Some of the folks who live on Flickr really are the worst of the worst. It’s disappointing seeing some of these same types take to someone’s personal Flickr stream.
Let’s try to show the world that there are still people on Flickr who can discuss and debate with dignity and respect. I think it’s fine to debate the new Flickr design. I think it’s fine to be strongly opinionated about it. I think it’s fine to attack the design itself and share why you dislike it. Attacking employees, though, is way over the line.
I have made my own mistakes on the web over the years. I, too, have, in the past, let my emotions get the best of me. It’s easy to get angry sometimes and I’m certainly capable of overreacting. I’ve tried to learn from these mistakes, though. It’s so much better to attack ideas than individuals. Hate is so ugly.
We are better than this.
Posted by Photography by Gallagher at 8:10 PM