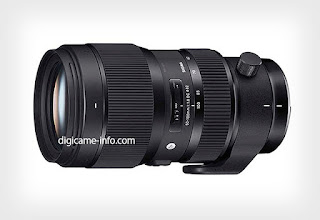 Whoa. Sigma is on the brink of shaking up the camera lens industry yet again with another groundbreaking Art lens. Next week, on February 23rd, 2016, Sigma will reportedly announce a new 50-100mm f/1.8 DC HSM Art lens — a zoom lens with an unusually large f/1.8 fixed aperture.

While news of this new lens has been rumored for days now, the product photo above and some specs were just leaked by Japanese camera site digicame-info.

It's designed for APS-C sensors with Canon EF, Nikon F, and Sigma SA mount, so it has a 35mm equivalent zoom range of 75-150mm — perfect for things like portraits and weddings.

Posted by Photography by Gallagher at 8:40 PM