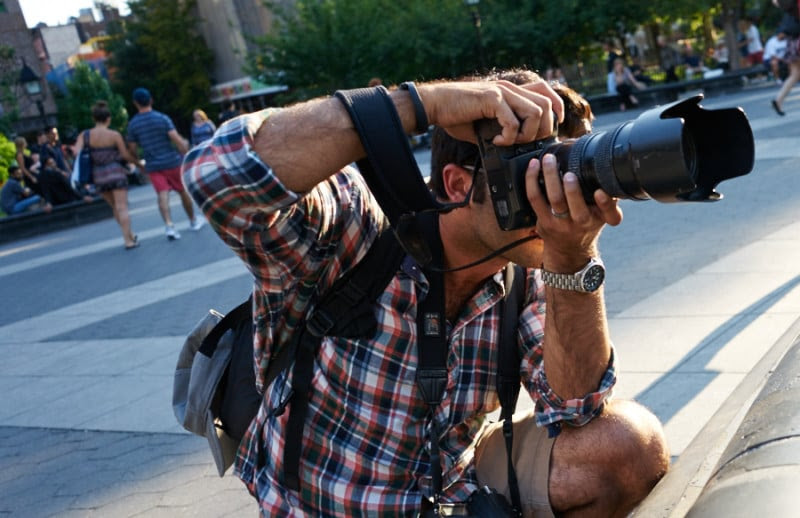 I'm like a lot of photographers. I want to shoot more often. And one big reason I don't shoot as much as I like is that I waste too much time reading about gear.

Now I've been shooting since 2008, which means I've been reading about photo equipment for 8 years. That's not an eternity, but it's long enough to realize that when it comes to cameras and lenses, photographers have a bad habit of making dramatic statements that have zero basis in reality.

Here are my 11 favorites:

11) Any Sentence Including "Microcontrast" or "3D Pop" or "Medium Format Look."

What happened to the word sharp? Because it seems like there's a new breed of photographer that seems hell-bent on sounding like a lens company marketing department.

Whenever I hear pseudo-science mumbo jumbo like "microcontrast," I think of a photographer trying a little too hard to justify a $3,000+ lens purchase.

Listen, these days it's pretty hard to buy a bad lens, no matter how much—or how little—money you're spending. So that fancy lens you want? If you can afford it, just get it. You'll probably like it.

And oh yeah, the only way to get the "medium format look" is to use a MEDIUM FORMAT CAMERA AND LENS.

10) I Prefer the Nikon Look

My favorite gear article ever is Fstoppers' blind test of the Nikon D810, Canon 5DSR, and Sony A7R II. They shot an identical picture with all 3 cameras, and people could not guess which camera took which picture.

The idea that we can clearly discern one camera brand from another is all in our heads. Image quality has been solved. You couldn't buy a bad camera if you tried these days.

Focus on that, NOT some silly idea of getting the "Brand X Look."

9) OMG That Lens Has the Best Bokeh!

I don't understand photographers' obsession with the rendering of out-of-focus areas. Look at any photo on this site that has a shallow depth of field.

If you're more interested in what's out of focus than the subject, then to me, the picture is a failure.

Strong subjects overcome 'bad' or 'distracting' bokeh any day of the week. End of story.

He could have made do with a Canon or Olympus or Pentax or Leica or anything else.

7) My Camera Is Outdated!

In photography, 99.9% of the time, newer is better. But any equipment that still functions as intended is not outdated.

But you know what? My 5D still powers on just fine and is 100% functional. So it's not outdated.

6) I'm Afraid My Gear Will Get Wet/Broken/Peed on.

Stop treating your camera like it's a newborn baby. If you take reasonable, common-sense precautions, your gear's going to be perfectly safe 99.999% of the time.

Keep your camera protected in the rain or snow. Stay off railroad tracks. And don't show off your expensive new gear in unfamiliar places.

But cameras were made to be used. And if you're not going to them in less-than-perfect conditions—when good pictures tend to happen—why even own a camera?

5) My Family Will Be So Happy I'm Bringing All This Gear on Our Vacation!

Here's a surefire way to ruin your family vacation: bring a huge photo backpack with 2 cameras, 9 lenses, and a gigantic tripod.

I live in New York City, which is jam-packed full of camera-wielding tourists. Almost every day, I see families sitting around waiting for Daddy (yes, it's always Daddy) to finish fiddling with all his photo gear.

And they never look happy.

Listen, your family is not signing up for to follow you on your photo safari. They just want to enjoy themselves. So at most, bring a camera and 2 lenses. You don't need anything else.

I've never understood the idea of shooting at a lens' sweet spot. I love my Sony 35mm f/2.8 lens. And let's say the MTF curves and the lab tests and all that say it's sharpest at f/8.

That piece of information is 100% useless.

Unless you're making truly massive prints and need maximum sharpness (99.9% of us don't), your aperture should be a reflection of the amount of light in the scene and/or your desired depth of field.

3) I Just Downloaded the Lightroom/Photoshop/Capture One/Apple OSX Update That Came Out Today!

I don't have many strong opinions on software, but I'll tell you this: NEVER download a new update when it's first released.

This is not a knock on Adobe, Phase One, Apple, or any other software developers. But with software getting more and more complex, it's impossible to test every possible configuration and setup.

Every so often, that means we have to deal with bugs.

But you can make things easy on yourself by letting your friends be the beta testers.

2) I Hate When People Say "Your Pictures Are Great, You Must Have a Great Camera!"

I translate this statement as, "I need to hear that I'm a great photographer."

The reason real people (as in non-photographers) say things like "your pictures are great, you must have a great camera" is because they don't know anything about photography and want to make conversation.

So please stop the phony outrage and accept statements like this for what they are: people just trying to be polite. They're talking about the tools because it's an obvious point of conversation.

And besides, how many times have you Googled "what camera does photographer Joe Schmoe use?" Because when you think about it, that's basically saying "Joe Schmoe's pictures are great. He must have a great camera!"

Listen, I tell myself all the time that I'm not obsessed with gear… and it's total BS.

I troll Craig's List for deals every single day, even for stuff I don't need. I'm always thinking about whether I should buy the new Sony A7R II, even though my A7 II perfectly suits my needs 99% of the time.

Let's just admit the truth: we all want new toys, whether it's a Nikon D5 or a Hasselblad or a $20 film point & shoot.

So am I crazy?

About the author: Michael Comeau is a NYC-based street and portrait photographer. He also runs the MikeOnTheStreet.com blog, where you can download his free book on shooting street portraits. This post was also published here.